9 Filipino Words that Don’t Have a Direct English Translation 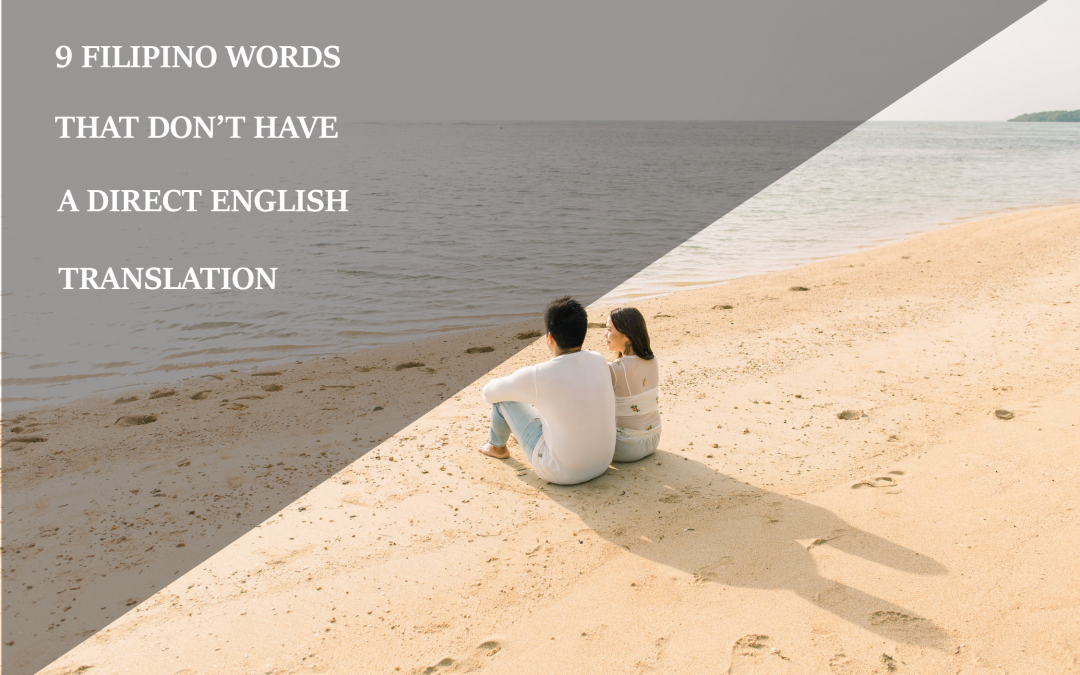 The Filipino language is filled with tons of different words, with Tagalog being hailed as the official language of the Philippines. Aside from Tagalog, there are also countless dialects spoken throughout the various parts of the country.

With such a vast number of words, it’s not surprising that some Filipino words don’t have an English counterpart. Many words do not have any direct English translation. If you’re interested in finding out why, take a look at these examples:

Perhaps one of the most popular untranslatable word in the Filipino language is the word “kilig.” Even though most Filipinos would mix it with several English words to make the expression “kilig to the bones,” the word itself is widely accepted as standalone.

In English, it could mean trembling, though even that translation is not close. After all, “kilig” specifically refers to the excitement and feeling you get when you have the proverbial “butterflies in your stomach,” like when you see your crush or when your partner surprises you with a gift. It can also apply to certain situations, like watching a romantic movie, where viewers witness something exciting like the main stars holding hands or even kissing.

The word “gigil” could be described as an intense urge to pinch or squeeze someone due to their cuteness. It can also be used to describe the urge to clobber or punch someone just because of how annoying they are. It’s basically a dual-purpose word designed for two different situations.

“Basta” is a word that can be synonymous with the word enough. In fact, it originated from the Spanish expression ¡basta ya! which translates to English as “enough already.” However, the Filipino version has quite a different meaning.

The word is often used in a conversation or argument between people who don’t have anything left to add to their point or simply don’t feel like expounding on their thoughts. Therefore, they just resort to adding the word “basta” in their argument.

Also, when Filipinos say the word “basta,” it’s often definitive, meaning that everything that’s been said before is final and true. It is often denoted as something that can’t be argued. For example, when Filipino children ask their mother why they should do what she told them, to which she replies “basta,” then that would mean they have to obey without question.

The word “lihi” can be associated with the term “pregnancy sickness.” However, as far as Filipinos are concerned, there’s a deeper meaning behind the word. The word is often associated with a pregnant woman’s irrational craving for something, and it’s usually something that occurs during her first trimester. Also, during this period, she’ll often go into mood swings and will crave various foods, even during the wee hours of the night.

In some cases, she may end up taking a liking to something to which Filipinos would believe will affect the appearance of her unborn child. For example, if a child resembles a frog when born, that’s because the mother enjoys looking at frogs during her pregnancy. In a sense, you can say that the child was “pinaglihi” to frogs. It’s bizarre, yes; but it’s actually something that’s part of the Filipino culture.

If you’ve ever used the phrase “I just can’t get enough,” then the exact opposite of that phrase would be the word “umay.” In the Filipino language, “umay” is a feeling that’s associated with having too much of the same food or doing the same work over and over again.

In the Philippines, where festivals are commonplace and tons of food is prepared for each celebration, it would be quite easy to experience this particular feeling. For example, if you ate too much lechon (roasted pig) when attending a festival, then you’d come to the point where you’d experience the feeling of “umay” or “nakakaumay.”

Of course, as mentioned earlier, the word isn’t just limited to food. It can also be used for a repetitive task you keep on doing over and over again. It could also be used when seeing the face of a co-worker you don’t like every single time you visit the office cafeteria. That, in essence, is called “umay.”

“Pasalubong” is basically a gift, but in context, it’s something you give to someone who’s expecting you, and vice-versa. It could be in the form of food, a gadget, or other small items. In the Filipino culture, if you’re working overseas and come home after a long time, then your relatives and friends would often expect you to give them a “pasalubong.”

The word “diskarte” is something you’d associated with being “street-smart” considering that it’s not normally taught in school. In English, the closest word would be “resourcefulness” or “ingenuity.” However, there’s also a negative connotation for the word “diskarte” as it could sometimes involve doing something mischievous, like a bit of theft or manipulation, to gain the upper hand.

If you’ve felt disappointed with someone for something they’ve done, then that could be a feeling that’s known in the Filipino language as “tampo.” In most cases, it’s a feeling that’s combined with silence and avoidance of someone, though it’s not quite along the lines of anger or sadness.

The word “bangugot” is often referred to by people as having a nightmare, except for one major difference. When you experience a nightmare, that means you have a really bad dream that may cause you to wake up in the middle of your sleep. On the other hand, “bangungot” will prevent you from waking up, ever, thus causing you to die in your sleep.

Filipinos believe that “bangungot” can be prevented by not sleeping in a full stomach. Meanwhile, the Filipino folklore associates it with a demonic creature known as batibat who will sit in your face as you sleep, thus causing you to suffocate to death.

There you have it – some of the common Filipino words that don’t have direct English translations. Of course, the list goes on considering the Filipinos’ quirkiness and their tendency to create their own words for just about everything.

If you’re interested in learning more about the fun and exciting Filipino language, or have a document you want translated into Filipino then Translation Boulevard is your trusted friend. It’s a professional translation service that offers translation to various languages, including Filipino, Chinese, Korean, Spanish, French, African, and more.